Behind the Bar at Sullivan's Steakhouse

June 04, 2012
Sullivan's Steakhouse hosted their "Behind the Bar" event for some of Houston's wine and food media last Thursday evening. The new Lucky $7 Happy Hour Drink and Food menus were featured. Even though I am primarily a wine drinker, I tasted two of the featured martinis: The Knockout and the Cosmopolitan. I did this with some trepidation because I really do not enjoy sweet, fruity drinks (unless I am on a beach) but I knew some of my readers would be interested in the quality of the Happy Hour Martini selections. 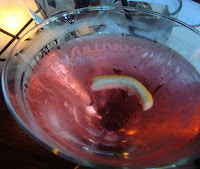 The Knockout Martini is Sullivan's new signature martini made with Svedka Clementine Vodka that has been infused with fresh Hawaiian pineapple with an orange twist. I enjoyed this a lot more than I expected I would as the pineapple was not the overpowering sweet flavor that I had anticipated, instead the aroma and flavor of fresh clementines prevailed. Next, I tasted the Cosmopolitan. I was pleased to see that it was a pale pink blush color rather than fruit punch red which is always a bad sign. Again, it did not disappoint, no odd candied character, just light citrus flavors with Smirnoff Vodka. The other happy hour martini was the CEO which is Finlandia Vodka with blue cheese stuffed olives, I did not try that one as I assumed it was pretty self explanatory. I thought the new Happy Hour Martini Menu was what it should be in that restaurant. There is also a longer Martini menu that is available at their regular prices.

The main thing that I was there to taste was the new private label 2008 Sullivan's Reserve Napa Valley Cabernet Sauvignon which is actually a blend of 77% Cabernet Sauvignon, 12% Merlot, 9% Cabernet Franc and 2% Petit Verdot. This wine was created as a collaboration between vintners Robert Foley and Steve Mathiason to pair with the steakhouse's menu. It has a classic Napa Valley character with its pronounced aromas of ripe black fruit with some pencil box and vanilla notes; a nice fruit forward young Cabernet priced at $13 a glass or $55 a bottle. 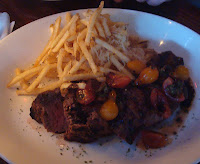 I also tasted most of the Lucky $7 Happy Hour food menu as well as a few of the other bar menu selections. I really enjoyed the new private label wine with the Blue Cheese Chips, Wild Mushroom Arugula Flatbread, Sliced Strip Steak with fries and the Filet Mignon Tips which were served over horseradish mashed potatoes inside of a jumbo tempura battered onion ring with peppercorn sauce. I am sure it would also pair well with the beef sliders which I did not taste.

Other menu items that I tasted and would recommend were the Black-eyed Pea Hummus, the Smoked Salmon, the Tuna Tacos and the Lamb Sliders. I enjoyed the first three items more with my martinis than with the wine. I thought that, while the lamb sliders were fantastic, they would be better paired with a glass of something a bit earthier rather than the new Cabernet. I finished up my tasting with the chocolate mousse which was worth every calorie.

Overall, I think Sullivan's new Happy Hour offerings are a great deal. Whether mixing some of the food specials with a bottle of wine of your choice or staying completely on the menus with the featured drink specials, you won't go wrong and you will definitely leave feeling happy. 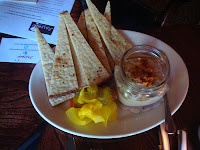 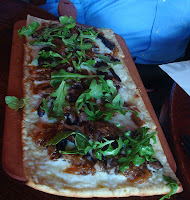