July 23, 2013
Bodega Ruca Malen’s wine maker, Pablo Cuneo and Chef Lucas Bustos, who oversees the restaurant at the winery, were in Houston earlier this month for the launch of the Bodega Ruca Malen wines in Texas. They are now available in Central Markets across the state. Central Market patrons had the opportunity to attend cooking demonstrations of specially prepared paired tastings by the winery’s chef while learning about the wines from the winemaker himself at tasting events that started in Houston and continued through San Antonio, Austin and Dallas. 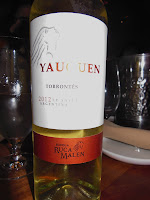 I had the opportunity to sit down for lunch and a tasting of their wines at America’s in River Oaks before their Houston Central Market event began. We started with the 2012 Yauquen Torrontes from Salta, an area which is well-known for producing some of Argentina’s best Torrontes due to the high elevation of the vineyard area and the high UV levels they receive promoting optimal ripening. This wine was crisp and dry, it did not have that hint of residual sugar that is commonly found in this variety; it was also fruity and easy drinking. Chef Lucas says for his paired tastings at the winery, he likes to serve this with anything fried, which, of course, works here in Texas where we do fry anything and everything. Chef Lucas discussed that he tries to keep the food local and seasonal at the restaurant so he doesn’t do seafood there due to the distance of the ocean to Mendoza but he has paired this wine with the local river trout. We sampled this with an array of America’s ceviche and we really enjoyed it. It will be priced at Central Market for $11.99. His planned pairing for the tasting dinner that evening was grilled squash ravioli with a lemon fennel and green apple salad.

We followed this up with a tasting of four reds which we continued with throughout our meal. I had the grilled beef tenderloin with tempura mushroom, basmati rice and green peppercorn sauce and the wines were all fantastic with it. All of the wines that we tasted were elegant and well balanced with a good texture, fresh flavors and pleasant finishes. They are also affordably priced which makes this a fantastic new addition for Texas wine consumers.
The red wines we tasted were:
·         2012 Yauquen Malbec/Cabernet Sauvignon blend. This was a well-balanced, fresh and fruity wine with ripe black fruit aromas and flavors with a spicy finish. Approximately $12, Central Market has the 2011 vintage where they served it with a goat cheese and sun-dried tomato crostini and quinoa salad.


·         2011 Ruca Malen Reserve Malbec. This was concentrated and juicy with aromas and flavors of ripe red cherry and plum with a light floral note, velvety tannins and a long finish. Approximately $17, Central Market has the 2010 vintage. They served it with olive oil cured beef with sweet corn and Malbec reduction.


·         2011 Ruca Malen Reserve Petit Verdot. This was a bit lighter with riper tannins than most renditions that I have had with aromas and flavors of red fruit, caramel and pepper with a long spicy finish. Approximately $17, Central Market has the 2010 vintage where they served it with mushroom encrusted grilled filet mignon with a pepper and chili marinade and fire roasted parmesan eggplant with sweet onion chimichurri.


·         2009 Kinien Malbec had pronounced aromas and concentrated flavors of ripe blackberry and plum with a bit of smoke and caramel. It had soft moderate tannins and a long lightly spiced finish. This is Bodega Ruca Malen’s highest expression of Malbec and it is, unfortunately, not yet for sale in Texas.

America’s owner, Chef Michael Cordua and Sommelier James Watkins also stopped by for a meet and greet with the Argentinean winemaker and chef and, of course, for a taste of the wine. We discussed the beauty of Mendoza, the winery and the terroir that makes the wine. Pablo Cuneo remarked on the consistency of the vintages and the rarity of a bad one in the Lujan de Cuyo sub region of Mendoza where the estate is located and in the Uco Valley where they also source grapes from small producers. Both of these premium vineyard areas are located at the foot of the Andes Mountains approximately 3,000 feet above sea level with warm days and cool nights, pristine water for irrigation and porous soil creating an ideal environment to produce ripe healthy grapes. Pablo feels that finding the best vineyard areas is crucial for the creation of elegantly styled wines that need little intervention during the growing season or during the winemaking process.
Each of the wines that we tasted was food friendly and had multiple pairing options. I enjoyed meeting the men who are the taste makers for Bodega Ruca Malen and I think most Texans will enjoy getting introduced to their wines. 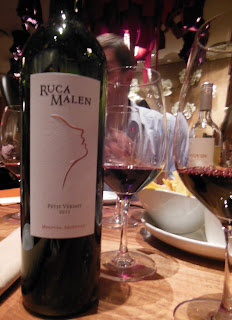