I had the pleasure of tasting the wines of Spicewood Vineyards last weekend with the winery’s visionary and president, Ron Yates. Ron grew up in nearby Marble Falls and graduated from the University of Texas. In his attempt to get the most out of his academic quest, he did a study abroad in Spain in 1999 to fulfill his college Spanish requirement; this led him to his love of Tempranillo wines.

Despite his not enjoying his early participation in Texas grape harvests as a kid, he decided to parlay what he called his highly embellished vineyard skills for the opportunity to stay on in Spain for the Ribera del Duero harvest after his Spanish courses ended. While he was in the midst of his personal Spanish wine adventure, he did think about how the terroir of Ribera del Duero reminded him of some areas back home in the Texas Hill Country. The idea of making the Spanish style wines that he loved back in Texas began forming. 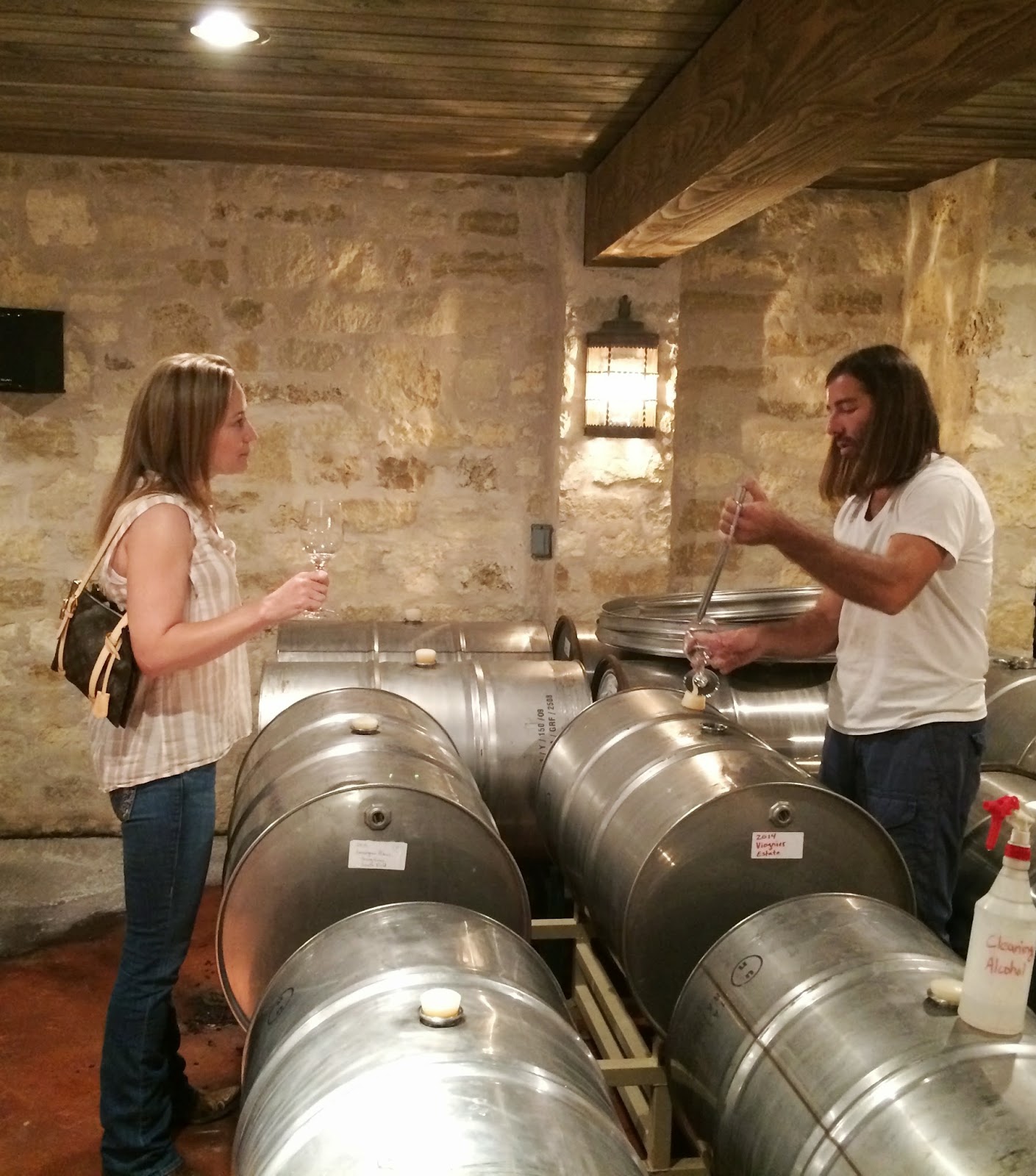 The longer that I talked with Ron, the more I was repeatedly struck by two things:
1)      Ron is a bit of a Renaissance man. His stories tossed into casual conversation between tastings and touring around the winery included not only working harvest but law school, playing guitar, his record label, the Austin music scene, the Austin real estate market, more tales of Spain (of course, he went back) and what I will call “Tex-ifying” some European wine making equipment -you just need to call a guy that welds together barbeque pits. And,
2)      Ron is going to have fun doing whatever it is that he is doing. His stories include many references to friends and family with a good dose of humor aimed primarily at himself but also at several buddies from high school who work with him.

Ron and his family purchased Spicewood Vineyards in 2007. The original seventeen acres were planted with Bordeaux varieties by the previous owners back in 1992. As these vines were producing grapes, they were able to start some experimental wine making immediately. Ron is committed to an estate program and he has increased the vineyard size to thirty-two acres with an additional eight acres planted to the west. He is focusing on planting Tempranillo along with other heat tolerant Spanish varieties like Graciano and Touriga Nacional.

While Ron says he prefers to use his own grapes whenever he can, he will not turn down any good fruit offered up by a trusted friend. He likes to experiment with different varieties and see what they can do. He jokes about some of these experiments having to go straight down the drain. He says the goal at Spicewood is to make wines that don’t need corrections and he feels this starts with carefully selected rootstock and varieties that suit the climate.

I had entered the tasting room at the winery from the 100 degree Farenheit temperatures so I was pleased to see an array of cool whites in the line-up along with a Tempranillo from the Hill Country Estate as well as one from the High Texas Plains. There was also a somewhat questionably labeled wine called Cabernet Claret, a kitchen sink blend of Texas grapes with 2% residual sugar.

My favorites from the tasting:

Ron also pulled some Albariño from the tank that I am looking forward to trying again as soon as it is bottled and ready. I also tried the Cabernet Claret 2012. I say “questionably named” just because varieties outside of the traditional Bordeaux grapes are included. Ron said that 2012 was not the best year for the estate Cabernet so Tempranillo and Syrah were also part of the blend for this vintage. Ron had considered changing the name but it is the featured wine at the annual Pair it with the Claret party which the vineyard hosts each February. Ron says that the 2% residual sugar and jammy red berry flavors makes it a fun wine to drink with spicy chili, barbeque and Mexican dishes, $17 a bottle.


The wines of Spicewood Vineyards are available for purchase on-line or at the winery.