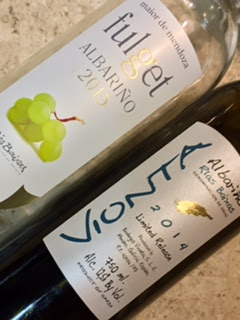 One of the most important white wine grape varieties in Spain is Albariño. It makes a light to medium body wine that is fresh, crisp and elegant. The wines are typically a pale gold or lemon-yellow color. They are dry and aromatic and loaded with sweet fruit flavors including ripe peach, apricot, melon, pineapple and mango. They often have a floral honeysuckle element as well. They all share good natural acidity and may have a light mineral note. They are easy drinking with a light to medium body and moderate alcohol.

The most important region for Albariño is Rias Baixas (pronounced Re-ass By-shass) which is located up in the northwestern corner of Spain near Portugal. The area is known as “Green Spain”. The climate is generally cooler than much of the country with plenty of rainfall. The Albariño variety does well in this terroir. The climate and soil are heavily influenced by the Atlantic as the vineyards lie along the  long coastal plains of Galicia bordering the ocean.

Although the region allows twelve different grape varieties to be grown, Albariño is the most heavily cultivated. If the label says Rías Baixas Albariño then it is made from 100% Albariño grapes. Enjoy these Rias Baixas wines with simple seafood tapas or take-out Asian cuisine. Served chilled, they make a great end of summer sipper for our balmy Houston evenings.

Fulget Rías Baixas Albariño 2015* - This wine is a pale straw color in the  glass with fresh fruity aromas of citrus, apple and melon with dried herbs and a light honeysuckle note with crisp acidity and a long fruity finish. This family owned winery has some of the oldest Albariño vineyards in the region dating back to the 1970s.

Vionta Rías Baixas Albariño 2014* - This wine is a pale yellow color with hints of gold. It has intense tropical fruit aromas with melon, peach and green apple, softer than the above but still with a pleasant acidity, it has a long, slightly tart peach finish. Bodega Vionta lies in the heart of the Salnés Valley. They strive to blend tradition with the best of modernity.