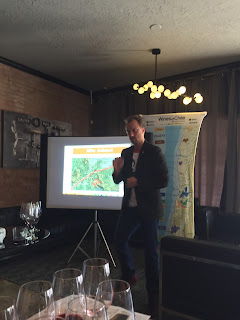 Tasting Notes from a Wines of Chile Masterclass taught by Fred Dexheimer, M.S in Houston on October 11, 2016.

Viña Santa Carolina - Luis Pereira 2012 - Sourced from the Central Valley (Maipo, Colchagua and Maule), this wine is a blend of 90% Cabernet Sauvignon, 5% Cabernet Franc, 2% Malbec and 3% other grapes from ungrafted 70 year old vines from vineyards ranging from almost 500 to to over 2100 feet above sea level. Named after the man who founded the winery in 1875, this iconic Chilean wine has a surprisingly moderate 12.5% alcohol by volume. Classic cassis Cabernet aromas with cedar and violet with matching concentrated flavors through the long slightly spicy finish. SRP $130

Santa Rita - Casa Real 2010 - Sourced from a single vineyard Alto Jahuel in the Maipo Valley, this wine is 100% Cabernet sauvignon sourced from vineyards over 1700 feet. It also has classic cassis Cabernet aromas and flavors along with a minty note but with a grittier tannic structure and a fresher mineral finish that Fred Dexheimer, M.S. attributes to the cooler vintage, he called this wine "one of the most elegant cabs in the world." SRP $70

Carmen - Gold Reserve 2009 - Also sourced from Alto Jahuel in the Maipo Valley, this wine is also 100% Cabernet Sauvignon. It was a more powerfully structured wine than the previous one. It was also more floral and contained a pronounced eucalyptus note and a spicier finish that was also attributed to the vintage and the longer aging period in new French oak. SRP $45

Cousiño Macul - Lota 2010 - Sourced from Alto Maipo Valley, this wine was crafted by Rosario Palma from 77% Cabernet Sauvignon and 23% Merlot sourced from a vineyard situated at over 1900 feet. This wine exhibited a greater freshness than the previous 2010, it also had red fruit aromas and flavors with a cocoa note and it was more tannic, this will be a great wine to revisit, it still seemed very youthful. SRP $85

Concha Y Toro - Don Melchor 1998 - Sourced from Puente Alto in the Maipo Valley, this wine can only be called complex. A blend of 93% Cabernet Sauvignon and 7% Cabernet Franc from a vineyard area set at over 2000 feet, this wine is earthy, minty, mushroom-y and almost delicate seeming with silky tannins and a lingering earthy finish. It was still youthful appearing, just barely turning towards a garnet color. No price available.

Almaviva 2012 - Also sourced from Puente Alto in the Maipo Valley, this wine is a blend of 73% Cabernet Sauvignon, 22% Carmenere, 4% Cabernet Franc and 1% Petit Verdot from a vineyard area at over 2000 feet with a higher clay component to the soil. The terroir and grape selection come together in a bold wine that shows dark berry fruit and Asian spices with a smooth, lingering finish. SRP $75

Montes Alpha M 2012 - Sourced from Apalta and Colchagua Valley, this wine is big, bold and flavorful, Fred Dexheimer, M.S. called it "a macho wine" and called the Apalta vineyard area "one of the greatest wine regions in the world. It had dark cherry/berry aromas and flavors with eucalyptus and a light toasted note through the long finish. SRP $85

Casa Lapostolle- Clos Apalta 2011 - Also sourced from Apalta and Colchagua Valley, this biodynamic wine moves away from the Cabernet-dominated style we had been tasting and into the realm of Chile's favorite adopted grape. This wine is a blend of 66% Carmenere, 19% Merlot and 15% Cabernet Sauvignon from 80+ year old un-grafted vines. This sophisticated red showed bright pomegranate aromas and rich flavors with an Indian spice note, silky tannins and a lingering mineral finish. Fred Dexheimer, M.S. called this wine, "Sexy". SRP $130

VIK 2011 - Sourced from Millahue, Apalta and Colchagua Valley, this wine was a big, chewy structured blend of 55% Cabernet Sauvignon, 29% Carmenere, 4% Cabernet Franc and 1% Petit Verdot. This wine has a ripe mixed berry character with a touch of eucalyptus, toast and spice in the long finish. SRP $140

All of these wines are highly recommended and worthy of the splurge! 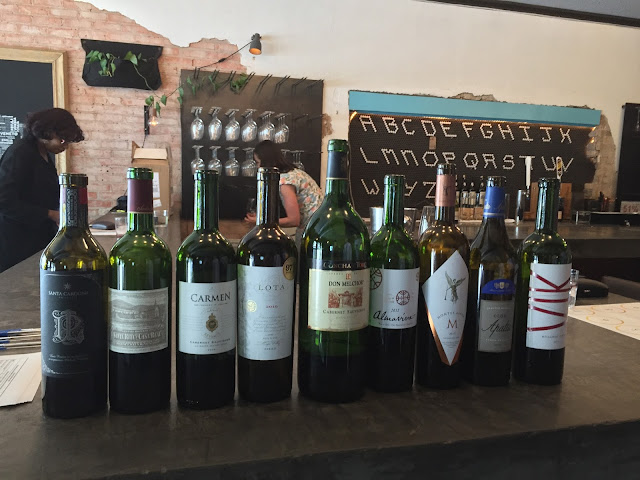