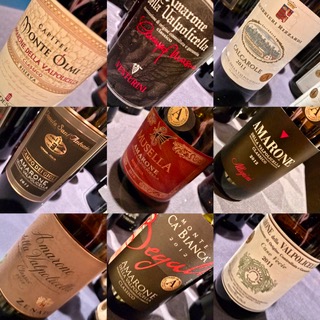 Amarone della Valpolicella wines come from the Valpolicella wine region which is located outside of historic Verona near Lake Garda in northeastern Italy. Vandenberg opened with the relatively short history of the wine. The area has long been known for its sweet version, a passito wine called Recioto della Valpolicella. This wine is believed to have been around since the Roman era while the first commercial release of an Amarone wine would not take place until the 1950's when a winemaker unintentionally left some of the Recioto fermenting until it was fully dry, accidentally giving birth to a new wine style for the region.

The production method used to make this style of wine is what makes Amarone unique but it also adds to its expense. These wines require more grapes per bottle, lots of handwork, more space and a longer creation time which all add to the cost.

Traditionally, the grapes were dried on straw mats for three to four months until almost 40% of the weight was lost, nowadays, plastic bins are also commonly used. This process concentrates the flavors and sugars leading to a typically intensely nuanced, higher alcohol wine.

After a discussion which included an overview of the terroir of Valipolicella, the unique red grapes and the production methods, attendees tasted twelve Amarone wines from a group of quality-conscious producers from the region whose stated goal is to be "guardians of tradition".

2012 was a hot summer with very little rain which led to lower yields from drought stress.
These Classico wines have a minimum aging requirement of two years after the grapes are pressed.

Allegrini - Amarone della Valpolicella DOCG Classico 2012 - Sweet aromas of cherry, blackberry, raisin, and fennel. Dry, lush, full bodied, with similar flavors and a lingering licorice-laced finish. Parzen stated his opinion that of all the wines we would be tasting today, this one was "a little more modern-leaning." 15.5% ABV.

Begali -Monte Ca' Bianca Amarone della Valpolicella DOCG Classico 2012 - With only 200 cases or so made in the best vintages, this single vineyard wine was one of the smallest production wines in the tasting. Lighter aromas of black fruit, baking spices-cinnamon and nutmeg with a bigger structure, a bit more tannic. Parzen said he felt this one was made in "a very traditional style". 15.5% ABV.

Speri -Vigneto Monte Sant'Urbano Amarone della Valpolicella DOCG Classico 2012 - Also a single vineyard wine, the grapes went through a longer drying time losing 42% of their volume creating a dry wine with  intense fruit and spice with a smooth peppery finish. In regards to this wine Parzen stated, "It's really alive, a big wine, I'm enjoying it!" while Vandenberg said the spicy nuance danced on her tongue. 15%ABV.

Zenato - Amarone della Valpolicella DOCG Classico 2012 - More subtle nose, slightly smoky bramble berry flavors in the smooth finish. Vandenberg made the point with this wine that despite the higher alcohol content, it remained very balanced because it was so well-integrated. 16.5% ABV.

2011 was a cooler year for the region other than a late August heatwave which brought about an early harvest.

Brigaldara - Case Vecie Amarone della Valpolicella DOCG 2011 - This wine comes from a higher altitude vineyard which had a later harvest. It has red cherry aromas and flavors with leather notes and a mineral nuance in the slightly tart finish. 16.5% ABV.

Venturini Campomasua Amarone della Valpolicella DOCG Classico 2011 - Only made in the best vinatges, this wine is rich and concentrated with sweet fruit aromas and flavors of blackberry, cherry and raisin, silky smooth, long finish. Vandenberg shared that the grapes for this wine were dried for over five months which led to the more concentrated profile yet the wine still maintained its approachability. 16.5% ABV.

The Riserva designation on the following wines means that the wines were aged longer with a minimum aging requirement of four years.

Musella - Amarone della Valpolicella DOCG Classico Riserva 2010 - This wine comes from a biodynamic producer. 2010 was a rainy vintage with a dry harvest. Very refined with dried red cherry aromas and flavors with a bit of licorice in the long, smooth finish. 16% ABV.

In Italy, the wines are often paired with roasted or braised horse or donkey meat but they also do well with beef, venison or other game. You can also enjoy Amarone della Valpolicella with mature cheeses. All of these wines are highly recommended, they are approachable and ready to drink now.