A Dinner Tasting at Château Freyneau 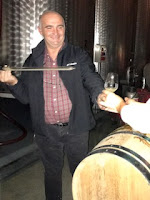 After a very full day, we arrived a bit late to our scheduled dinner visit at Château Freyneau with owners Eric and Valérie Maulin. My jet lag starts to make its presence known here, I somehow did not take photos of Eric cooking our beef course over vines or the dish prepared on the plate. I just ate it, it was delicious as was everything that they served us that evening. 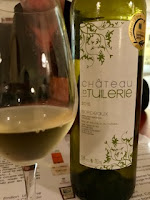 Third generation winemaker, Eric Maulin toured us through the winery while sharing tastes and stories along the way. They make about 200,000 bottles annually, most of which being red wine. The 45 hectare family estate has been sustainably grown since 1992. The soils are a mix of clay and limestone where he primarily grows Merlot but also has Cabernet Sauvignon, Cabernet Franc and Malbec. He only has 4 hectares of white grapes, most of which is Sauvignon Blanc.

He also talked about how the landscape of his part of Bordeaux has been changing in recent years due to urban sprawl. The number of producers has significantly dropped with only a few estates left, the majority of which are fairly small. 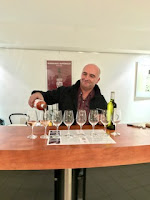 Château La Tuilerie Bordeaux Blanc 2015 - Primarily made from Sauvignon Blanc with some Semilon and Muscadelle, this wine is fresh, citrusy aromatic with a pleasant weight and texture. 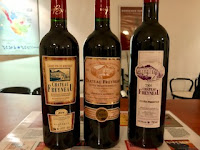 Château Freyneau Cuvée Traditionnelle Bordeaux Supérieur 2012 - This wine is chosen from the best tanks with a percentage aged in mostly neutral barrels for 16 months. This smooth blend of Merlot, Cabernet Sauvignon and Malbec shows ripe dark plums and berries playing nicely with forest floor and cocoa through the dry, velvety finish.


Château Freyneau Cuvée Prestige Bordeaux Supérieur 2005 - This wine is only produced in exceptional years, it is sourced from the property's oldest vines and aged in new French oak barrels for a minimum of 16 months. Still surprisingly young after 12 years, this wine is a blend of Merlot, Cabernet Sauvignon and Malbec. It is dry, rich, elegant and complex with blackberry, plum, chocolate and tobacco mingling through the smooth, lingering finish.

All of these wines are recommended.