The Vineyards of Lodi - Bechthold Vineyard 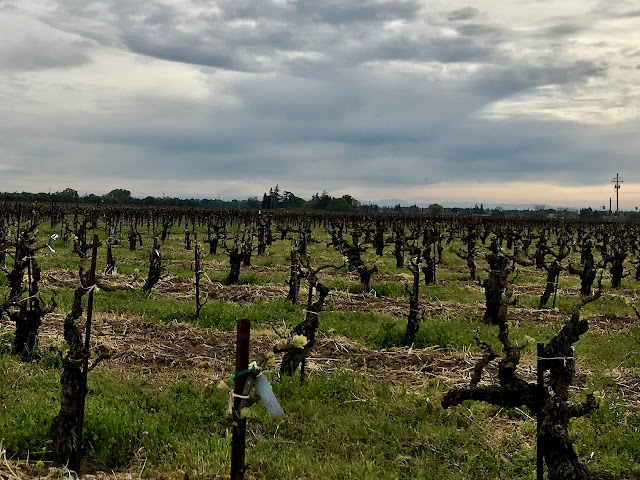 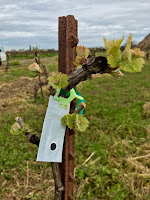 Lodi’s famous Bechthold Vineyard sits on 25 acres in what is now the southwestern Lodi sub AVA, Mokelumne River. This parcel of land is home to 133 year old vine Cinsault which was planted in 1886. The vines are head trained, un-grafted, dry-farmed, and organically grown on sandy loam soil. Bechthold has the distinction of being the oldest continuously farmed vineyard in Lodi and the region’s only known large planting of Cinsault. 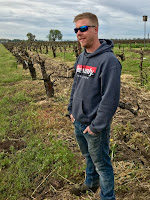 Cinsault is a red grape originally from southern France primarily used in both red and rosé blends. Cinsault is valued for creating wines that have fruity aromas with a pleasant texture. The Cinsault vines at Bechthold Vineyards are believed to be the oldest Cinsault vines in the world due to the vines of Southern France being replanted in the early 20th century after the phylloxera epidemic. Kevin Phillips of Michael David Winery, has farmed the vineyard with his team since 2008 under a long term lease with the Bechthold family. 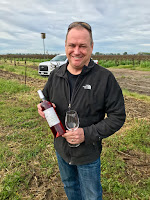 Michael Klouda, viticulturist for Michael David Winery, joined our group to explain how the vineyard is managed. Klouda shared that twelve wineries pick grapes from specifically allocated rows in the vineyard. Some of these winemakers are coming from outside of Lodi to purchase this unique variety. Due to a bit of variance throughout the field, most of their rosé clients pick from vines closer to the river which accounts for about 20% of the grapes. The vines from that area display more vigor and the grapes tend to have less color. Twenty rows in from the river is where the vines for red wine production begin. The grapes from this part of the vineyard tend to display both a deeper color and a richer flavor.


Klouda reiterated that the vineyard is organically farmed. He pointed out some tags that were hanging from the vines and shared that these were pheromone disruptors designed to help control a mealy bug infestation. The pheromones that are released from the tags confuse the male mealy bugs preventing them from finding mates. He said they have noticed a decline in the spread over the course of their use. Klouda also noted that rotating the cover crops on every other row provided the vineyard with a natural 15-30 lbs of slow release nitrogen throughout the growing season.

We were joined by Bob Colarossi of Estate Crush and Ryan Sherman of Field Family Wines to taste their selections that contain the Cinsault grapes from the Bechthold Vineyard alongside the offerings from Michael David.

As the tasting began, Randy Caparoso (not pictured), resident editor for the Lodi Winegrape Commission Blog, shared his thoughts on the common element of the wines made from the Cinsault grapes from the Bechthold vineyard. He describes them as having a strawberry rhubarb pie characteristic. If you've never had a rhubarb pie, this is a great way to describe the light note of pleasant tartness that seems to always accompany all of the lively red fruit aromas and flavors of the Bechthold grapes in the glass. I would add that the wines also seem to share a familiar freshness and elegance, a lighthearted acknowledgement to the drinker that they do, indeed, come from a special place.
All of the following wines are highly recommended,

Estate Crush Rosé of Cinsault Bechthold Vineyard Lodi 2017 - Dry, fresh and fruity with strawberry and watermelon notes throughout the lingering finish. "We like restraint," said Colarossi when asked to describe his wine making philosophy as he poured, "by that, I mean we like good acid and lower alcohol." 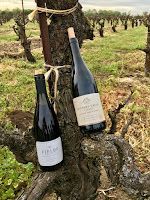 Michael David Winery Cinsault Rosé 2018 - Crisp and dry with light floral aromas over strawberry and peach ending with a slightly tropical finish. Klouda shared that this vintage spent less time on its skins than the previous year, creating a lighter, more easy-drinking style for 2018.

Fields Family Wines Bechthold Vineyard Cinsault 2017 - Vibrant floral notes combine with an explosion of pomegranate to create a zippy, yet juicy red with a pleasantly persistent and slightly spicy finish. Sherman said that the Fields Family had changed their style a bit over time as they became more familiar with what the vineyard offered, they now do whole cluster, semi-carbonic fermentation with native yeasts to showcase both the grape and the terroir. 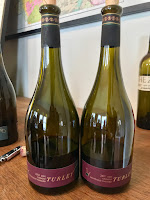 Michael David Winery Ancient Vine Cinsault 2017 - Raspberry and pomegranate happily slow dance with white pepper throughout the lengthy finish. Klouda shared that this wine spends 10 months in neutral oak which contributes to the round feel.

Later in the week, we would also have the opportunity to taste two vintages of Bechthold Cinsault from Turley Wine Cellars along with their fantastic line up of Lodi Zinfandel with winemaker, Tegan Passalaqua. There will be more on that here later but I wanted to include those wines in this post. Passalaqua shared that he has been picking from Bechthold since 2008. He had traveled through Southern France and had fallen in love with the grape there and that was the style he was hoping to make from the grapes from Bechthold Vineyard. He selected his rows before he knew exactly what the vineyard would offer, he has stayed in the section he originally chose because, "It tastes the best," he said with a smile.

Turley Cinsault 2017 - Light, fresh, and elegant with bright floral aromas and red berry flavors with a pleasant tartness in the finish.
Turley Cinsault 2013 - Fuller bodied, lots of structure, grippy tannins and a beautiful purity of fruit. Passalaqua described 2013 as "a phenomenal year."