April 17, 2012
In the past few weeks, I have gotten way behind on things about which I wanted to post. To name a few, this would include notes on: a beer, saki and cider tasting, a Sherry tasting, a bottle of Cabernet from British Columbia, a Mexican Merlot, a few bottles of Romanian wine, Krug Grande Cuvee Brut Champagne, Pierre Peters NV Cuvee de Reserve Blanc de Blancs Champagne, some of Napa Valley's finest: 2006 Darioush Merlot, 2006 Dominus, 2006 Quintessa and last but certainly not least, the Houston Bloggers Dinner at Ciao Bella.

All of these were certainly "thought inspiring"  but the clock is ticking so I decided to summarize what a few weeks looks like in the life of someone who is trying to stay on top of the world of wine and beverages before these thoughts were just "lost" for good.

The Beer, Cider and Sake Tasting: After over 20 bottles of beer, I am still pretty much of a Hophead but I knew that going in. I certainly enjoy a good brew but I was not really inspired to start blogging beer, cider or saki. Of interest to me, mainly because I had not ever had it﻿, the nigorizake Snow Beauty which includes the lees and gives the sake a milky appearance.

After having been a part of 4 or 5 Sherry tastings within the last two years, my thought remains the same after this one...Sherry is never going to be for me. I get its historical significance, I understand the unique way it is made but I personally cannot get past the fact that I just don't like it so I will not actually be commenting on it. 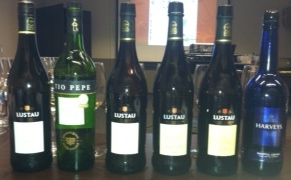 This next bottle is not available in the Houston market as far as I know which is a shame. A friend had a friend traveling in Canada and he brought it home and she was kind enough to share it (Thank you, Yvonne!). The 2009 Blasted Church Cabernet Sauvignon-Merlot from Okanagan Falls, BC. A nice balance of fruit and structure, absolutely lovely. If you are traveling there, it sounds like a great place to check out.

The 2006 Don Luis Cetto Seleccion Reservada Merlot from Valle de Guadalupe, Mexico, was brought home from Mexico by my brother-in-law who was kind enough to share it with me. The wine had a beautiful nose but was just a little thin on the palate for my taste. Another lady in the group, however, thought it was fantastic. Unfortunately, I did not get a very good bottle shot of that one.

Romanian wine...In a short time span, I read a posting about a Romanian wine, tasted a few of their wines in a classroom setting and then went to a friend's house who just happened to be serving a white Romanian wine that she had just had in a deli in New York and had really enjoyed. My main thought- Romania is around 10th or 11th in world wide wine production, I guess we are going to be seeing more of it in the Houston market.

Champagne thoughts, so unlike me to let these slip by. No surprise, they were crisp, bubbly and delicious. One big house bottling, Krug Grande Cuvee Brut NV Champagne and one grower bottling,  Pierre Peters Cuvee de Reserve Blanc de Blancs NV Champagne. Two different evenings with only happy thoughts and memories involved and absolutely no spitting required.


Two ridiculously over the top Napa Valley splurge bottles, I know. They were, however, everything that they should have been and you do have to wash your dry-aged ribeyes down with something. 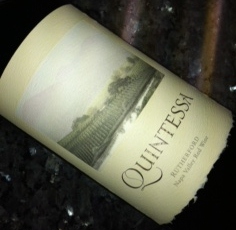 The 2006 Darioush Merlot was enjoyed with friends at the BRC Gastropub. By that, I mean that 3 couples sucked down 2 bottles in record time. Yummy aromas and lush in your mouth. A terrible picture, I know, but I was not with people who are used to the restaurant photoshoot which is a beloved activity of my fellow bloggers.
Speaking of my fellow bloggers, I did not want to miss the opportunity to say how much I enjoyed the mini Houston Wine Bloggers summit last week which was set up by DoBianchi at Ciao Bella. The food was outstanding, the conversation was fascinating and the wine was a diverse assortment of  deliciousness. Absolutely looking forward to doing it again soon! 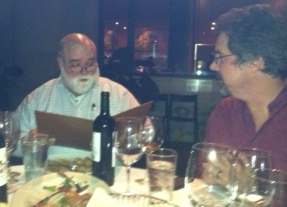