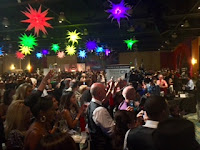 The Wine Rendezvous Grand Tasting & Chef Showcase was held at the Woodlands Waterway Marriott Hotel and Convention Center last Saturday evening. This annual event is one of the best consumer wine and food events held in the greater Houston area every year.

This year more than 2,500 wine and food lovers tasted their way through imaginative dishes and hundreds of wines while chefs representing nearly 60 restaurants competed for Wine & Food Week's Waterford Crystal Chef of Chefs award.  The competition was intense and the impressive culinary creations were not to be missed.

This year's event featured some of Texas' best wine along with California and European favorites, as well as a fantastic array of Champagne and other sparkling wines of the world. The impressive line up of wines features something for everyone and allows each guest the opportunity to try wines in a variety of styles from all over the globe and enjoy pairing experiences that they might not have ever discovered on their own. It is one of Houston's not to be missed wine and food events.

See My Photos of the Event Here