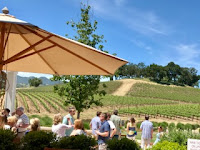 Justin Vineyards and Winery was our next stop for lunch and a tasting. The winery sits below rolling vineyards providing picturesque views all around. The beautiful landscaping and gardens ensure that the patio seats are highly prized for tastings. 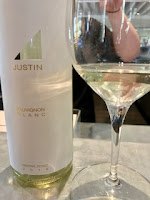 The Restaurant at Justin is a Paso Robles dining destination. The restaurant features a farm-to-table menu with something for everyone on the eclectic list, choose from American home-style favorites to the internationally inspired. Each item comes with a
suggested wine pairing so you can create your own special meal. We started with a taste of the Justin Central Coast Sauvignon Blanc 2016 which was fresh, crisp and tropical. 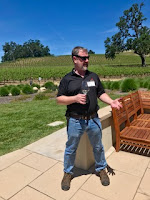 Winemaker, Scott Shirley greeted us and took us on a mini-tour of the grounds. Shirley has an impressive background. He is a UC Davis graduate with a degree in biochemistry who honed his winemaking skills at some iconic Napa Valley wineries including Opus One. He doesn't rely only on his science background, he considers winemaking to be a bit of an art as well. He pointed out that his job is always easier because he starts with high quality fruit.

He shared the story of owner and company namesake, Justin Baldwin, who was drawn to Paso Robles in 1981. The rich limestone soils, steep hillsides and the wide diurnal swings seemed the perfect place to plant Bordeaux varieties. Thirty-six years later, Justin Vineyards and Winery now produces some of the most iconic wines from the Central Coast. Shirley joined the team in 2012 and says he has really enjoyed his time in Paso Robles and is proud of the wines they are making. 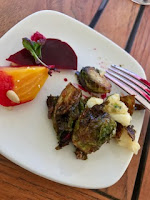 As we took our seats at the shaded patio table, Shirley recommended two things for the table to share: the pickled beets with goat feta, pine nuts, citrus and watercress and the Brussels sprouts prepared with blue cheese,
walnuts, pomegranate, and apple cider gastrique. He assured us that was the extent of his food knowledge, he was there to talk wine.

He poured the Justin Paso Robles Rosé 2016 to go with these vegetable laden starters. This refreshing Rosé is made in the Provencal style but is made from Cabernet Sauvignon, Justin's flagship grape. It had cherry/berry aromas and flavors with a light herbal note in the fresh finish, it was perfect with the appetizers. 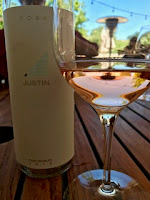 As we had an array of red wines up next, I ordered the Patty Melt served with Holy Cow cheese, caramelized onions, thousand island dressing and a dill pickle on sourdough bread. This entree was listed as the suggested
pairing for their famed Isosceles wine.

Justin Justification Paso Robles 2014 - This wine is inspired by Bordeaux's Right Bank with its blend of 55% Cabernet Franc and 45% Merlot which is barrel aged in French Oak of which 50% was new. Bright cherry aromas and flavors with baking spice and smoke, full bodied and fresh with smooth tannins and a lingering finish.  SRP $50 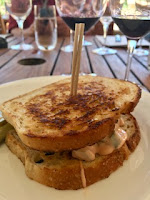 Justin Savant Paso Robles 2014 - A somewhat unusual blend of 62% Syrah with 33% Cabernet Sauvignon and 5% Grenache aged in French Oak
barrels for 21 months of which 60% were new. This wine is intense and lush with jammy berry flavors, baking spices and a note of smoked meat with a full body, chewy tannins and a peppery note in the long finish. SRP $50

Justin Isosceles Paso Robles 2014 - This flagship wine is made from 73% Cabernet Sauvignon with 15% Cabernet Franc and 12% Merlot aged 21 months in new French Oak barrels. Rich and fragrant with blackberries, cassis and licorice, this full bodied red blend is big and bold yet still approachable with chewy tannins and a lengthy chocolate laced finish. SRP $72

All of the wines at Justin are recommended, as is a visit to the winery should you be visiting Paso Robles. 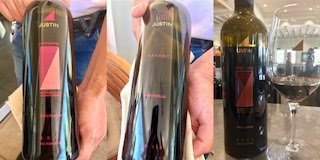