Frescobaldi - Tuscan Wines for Any Occasion 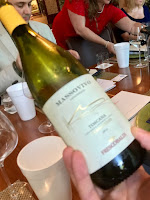 Allessandro Bernini, Italian Portfolio Manager for Shaw-Ross importers, was in Houston last month to present some of the current releases from Frescobaldi Toscana. The tasting was held over lunch at Kiran's restaurant to showcase the versatility of the wines with cuisine beyond the expected Italian. The majority of these wines are found on restaurant wine lists versus at retail shops, all are sustainably made.

Bernini shared the extensive history of this family winery which begins over 700 years ago when the then banking family moved to medieval Florence from Germany. By the dawn of the Renaissance, the Frescobaldi's were the financial backers of major improvements to the area paying to build things such as the Santa Trinita bridge. Financial success and strategic 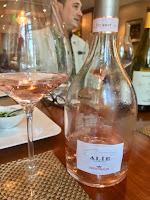 marriages with other landholders eventually brought six estates into the family holdings, all of which were conducive to the growing of grapes for fine wine. The vineyards ranged in location from cool climate mountain side locations to sunny coastal sites.

In modern times, the 30th generation of the family oversees the winemaking and they continue to add new vineyards both in Tuscany and elsewhere in Italy. All of the estates are also engaged in hospitality, said Bernini, with hotel rooms in the original castles along with restaurants serving up excellent food along with the wines. 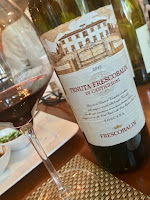 Massovivo Vermentino 2015 - Sourced from a sunny coastal vineyard in Maremma, this white wine had aromas of citrus blossoms and flavors of fresh Mandarin orange with a distinct saline minerality from the ocean breezes. It was delicious with the spinach pakoras and the salad.

Frescobaldi Ammiraglia Alie Rosé 2016 - This Provencal style rosé is a blend of 80% Syrah and 20% Vermentino which were vinified separately and then blended. Bernini stated that the seaside vineyard shares a similar microclimate to Provence and that the Vermentino adds elegance and lifts the aromatics. This wine is limited with only 20,000 bottles sent to the U.S. The wine had fresh strawberry aromas and flavors with a light mineral finish that was delicious with all the soups in the flight but particularly tasty 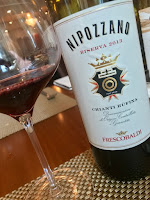 with the tomato saffron soup.

Tenuta Frescobaldi di Castiglioni 2015 - This Super Tuscan blend is composed of Cabernet Sauvignon, Merlot, Cabernet Franc, and Sangiovese sourced from the Colli Fiorentini sub-appellation of Chianti which is located in the hills around Florence. This property was the first property the family owned dating back to the 1300s. This wine displayed juicy cranberry aromas and flavors which Bernini said comes from the property's terroir which he says makes the international grapes behave like Tuscan grapes. He also referred to this wine as "a gateway to Italy for California wine drinkers". 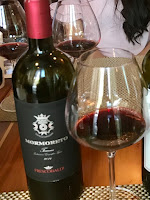 Frescobaldi Nipozzano Riserva 2013 - This wine is sourced from a property in Chianti Rúfina that came into the family in the form of a dowery in the 19th century, there are still bottles dated from 1864 in the cellar. This blend of 90% Sangiovese with some Colorino, Cabernet and Merlot was aged for 2 years in barrel creating a rich and intense red with red cherry aromas and flavors and baking spice notes through the lingering finish.

Frescobaldi Mormoreto 2014 - This single vineyard red blend is composed primarily of Cabernet Sauvignon with some Cabernet Franc, Petit Verdot, and Sangiovese which was then aged for 24 months in part new and part used barrique which is then followed by an additional 6 months of bottle 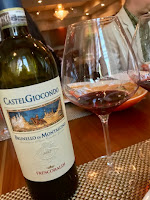 aging. This full-bodied red wine had aromas and flavors of mixed berry jam with notes of coffee, it was rich and velvety with a persistent finish.

Frescobaldi Castel Giocondo Brunello di Montalcino 2012 - This wine is 100% Sangiovese that was aged for a total of 5 years, half of the wine spent 2 years in barrique and the other half in Slavonian casks before being bottled. Bernini says this wine lies in the center of traditional and modern style Brunello, it is less austere than traditional but not as concentrated as modern. This elegant full-bodied red had aromas and flavors of ripe raspberry with light floral and dried herb notes, sweet ripe tannins, good acidity and a lengthy mineral-laced finish. While each of the reds was enjoyable, the Brunello was my favorite with the spicy lamb vindaloo.