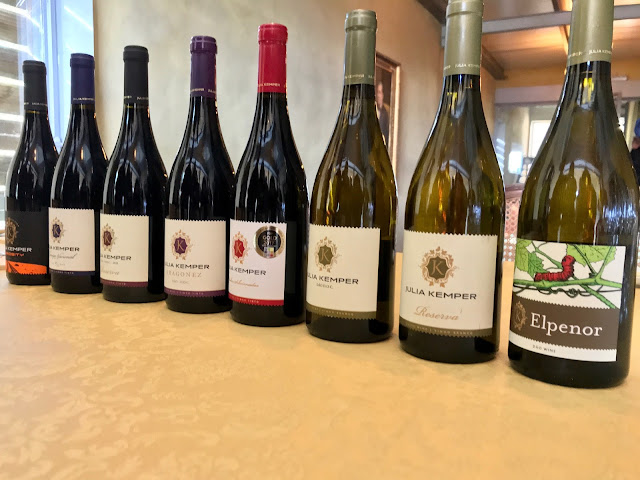 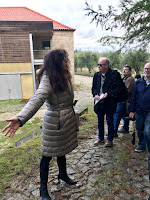 Our first stop in the Dão wine region of Portugal was at Quinta do Cruzeiro where Julia Kemper Wines are produced. As we headed up to the vineyards, I felt like I was hiking through the woods at camp but the high heeled boots of our leader suggested we were in a more civilized place. All of the vineyards are surrounded by pine forests with eucalyptus and olive trees bordering the edges. There was a freshness in the air that Julia said came from the surrounding mountains, the diverse plant life and colorful mushrooms suggested something more enchanted. Julia shared her history with us as we walked. The farm has been in her family for more than 400 years, it was always taken care of by the men in her family. 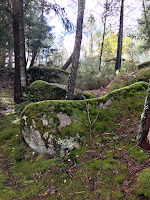 In 2000, Julia was a lawyer in Lisbon when her father requested that she take over running the family farm. Why me, she thought. She would have to quit her job and begin a new life and she was not sure that she wanted to do that. She was also hesitant because she knew what a tremendous responsibility it would be and her father stipulated that she could never sell it, it must remain in the family.

She was also surprised that she was chosen. It was always the men who had been in charge. Growing up, she had never even been invited into the cellar to see the process of making wine. The family had always sold the majority of the grapes they produced, they typically only made a small amount of wine for the family and for friends. Their wine making was more of a hobby that they were passionate about but it was not the farm's main business. 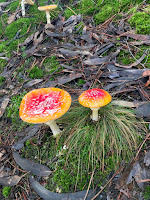 After 3 years she finally accepted. She arrived in 2003 to find that things were not as she would have liked. She found piles of old containers from the 1930s, partially buried, that once had held chemical fertilizers, pesticides, and herbicides. She was horrified to realize how the farm had been run during the previous century. She immediately made the decision to go organic. She also made the decision to stop selling the property's grapes. She wanted to make wine from the farm's grapes and sell that instead.

For the next five years, she began changing things. She chose not to produce wine during that time. In addition to getting the property cleaned up and properly disposing of the chemical mess of the past, she also brought in some French wine consultants. While they helped with the studies of soil and climate to determine where each variety of the native vines should be grown, she was most interested in learning how best to sell the wine that she planned to produce.

While Portugal has long been known for their field blend wines, her consultants advised her to make varietal wines instead. They believed that making wines from single varieties of grapes would be easier to sell on the world market. As consumers became more savvy about the different types of wine available, they would be able to distinguish which varietals they preferred.

Once she had decided on her business plan, she needed to create a brand. Julia joked that as with many Portuguese, she had a long list to choose from as her full name is composed of 14 names. As a lawyer, she was practicing as Ana Julia de Melo Kemper. She decided on Julia Kemper believing it would be the easiest to pronounce in the international market and feeling strongly that the initials JK had been lucky for others throughout history.

"Currently, the wines are being sold from Canada to Beijing", she stated, "It is not only my full time job, it is my full time passion." What she initially construed as a burden has become, "a very pleasant life, though it is a lot of work, it is worth it." She still feels like she is learning how best to handle her new role and she shared she surrounds herself with good people to help her. The 60 hectare estate has 20 hectares under vine. The vineyards sit on soils composed of granite, schist, and quartz on three plateaus. The vineyards are now certified organic using many bio-dynamic principles. Julia summed up her journey, "I became organic because I was organic. I am happy to take care of my family farm and make the type of wines I like and want to drink."

The Tasting
Elpenor Vinho Branco 2017 - This white is fermented in stainless steel, it is crisp and fresh with grapefruit and a light mineral finish.
Julia Kemper Vinho Branco 2016 - About 25-30% of this white blend spent time in new French oak giving it a slight creaminess to the texture yet still fresh and light with pear and citrus aromas and flavors with a light tropical note in the finish. 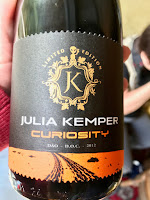 Julia Kemper Reserva Vinho Branco 2015 - This Encruzado-based wine spent one year in new French Oak giving it a rich, full bodied, creamy feel with vanilla hints mingling with the peach and grapefruit aromas and flavors through the lingering mineral-laced finish. Julia called this one a winter white.
Elpenor Tinto 2014 - This red blend saw no oak. The wine is fresh and juicy with black cherry aromas and flavors and a tart, peppery finish. The label for this line was inspired by a picture of a caterpillar taken in the vineyard. It was peacefully living there because the vineyards are organic.
Elpenor Reserva Touriga Nacional 2014 - This velvety red wine spent four years in oak barrels. It has fresh aromas and flavors of ripe black cherry and blackberry with a slight almond skin note in the lingering finish.
Julia Kemper Curiosity 2012 - This red wine is composed primarily of Alfrocheiro with 10% of Touriga Nacional, it spent 2 months in three year old French oak barrels. It was fruity with raspberry and cherry with a light floral note of violet and hints of fresh herbs through the persistent finish.

If traveling to Portugal, this winery is on the Dão Wine Route. The wineries that are part of this group are tourist friendly, though reservations are required. 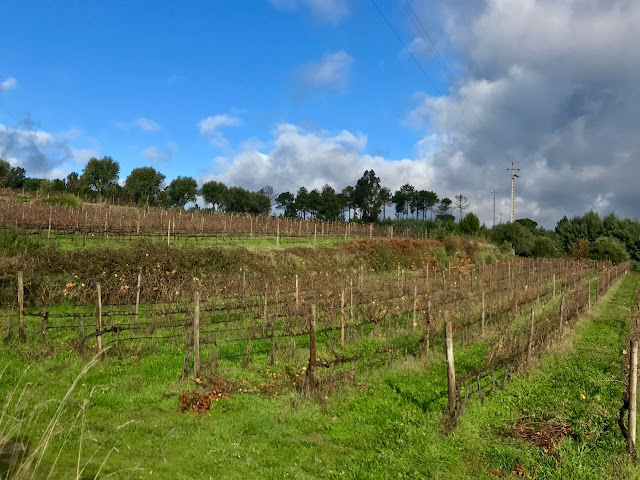