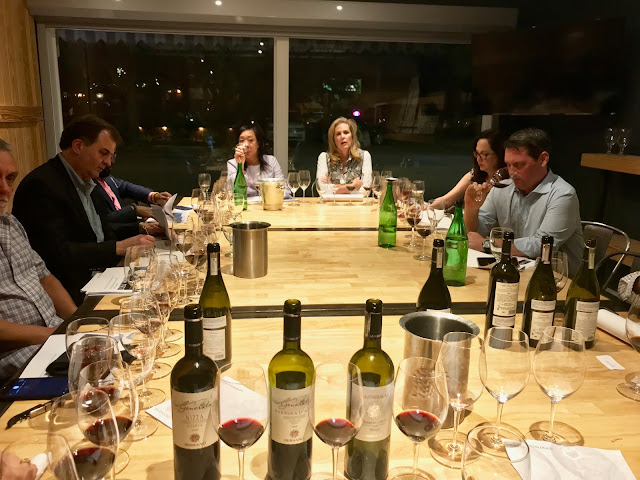 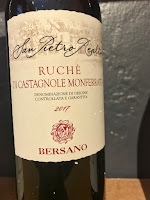 A couple of weeks before I went to Piemonte, Paolo Lovisolo, Bersano's Direttore Commerciale, was in Houston for a tasting at Vinology for a tasting with some local wine professionals.

He poured everyone a glass of Gavi, a crisp white wine, to get started.
"Piemonte is a region that is not so easy to approach. Everyone knows Barolo and Barbaresco, the vineyards and hills are Unesco World Heritage Sites but it is still a region that is difficult to understand." Giorgio Caflisch, an Italian wine teacher at The Texas Wine School, volunteered that he tells his students that Barbera is the gateway to Piemonte wines. Lovisolo agreed with Caflisch and then continued his story. 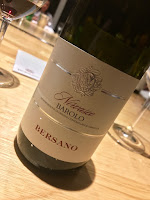 Bersano is a historic company founded at the beginning of the 20th century in 1907 by Giuseppe Bersano, who had a passion for wine. Initially, he bought grapes from local growers but then began investing in land for Barbera believing that would be the future of the company. His uncle, a lawyer, joined the company and began marketing the wine. He also helped to purchase more vineyard land. The two felt that vineyard management was the key to making great wine. Time would move on and the company would eventually be sold to Seagram's who sold off some of the premium land holdings in Barbaresco and Barolo including the Castle of Barbaresco which is now owned by Gaja. The company would change hands again in the mid 1980s. 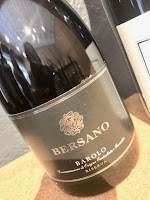 Today, Bersano is the largest private owner in Piemonte with over 230 hectares of vineyards in ten estates. While the focus is on Barbera in Asti, they also produce Gavi, and have 12 hectares in Serralunga, the highest village in the Barolo region. Lovisolo described the company as classic producers wanting to express the soul of the microclimates they possess. He said the company has no interest in making international style wines, they wish to focus on the uniqueness of their vineyards. They vinify and age in the region's traditional ways using big barrels that hold 10,000 liters.
The company is located in Asti where Barbera is the most important grape. It is planted in the best positions and in single vineyards, because of this, Lovisolo stated that he believes that Barbera d'Asti is better than Barbera d'Alba.

The company has also produced white Gavi wines for 40 years. They don't own the land from which these grapes are sourced but have had a long-term handshake deal to rent the the land. Gavi is made from the Cortese grape and comes from the Gavi village. The vines are grown on calcareous soils with some clay. The area receives some wind from the seaside at night causing temperature drops which help to maintain the grape's natural acidity. Lovisolo stated the the region has more ocean influence than most of Piemonte.

The Tasting:
Bersano Gavi 2017 - Easy drinking and crisp with good acidity, delicate and elegant with light floral notes, pineapple, tangerine, and a mineral-laced finish.
Bersano Barbera d'Asti 2016 - Fresh and fruity with red cherry and hints of eucalyptus, an easy drinking wine. This wine is a classic blend from several areas, fermented in stainless steel before being aged in large barrels for three months.
Bersano Ruche - Aromatic with rose and red fruit with velvety tannins, fresh acidity, and a spicy white pepper finish. Lovisolo referred to it as "easy to appreciate and enjoy" and alerted the group that most is sold in the Italian market. They only have 25 hectares of these grapes, the wine is produced only in stainless steel.
Bersano Barolo Nirvaisco 2013 - Big tannic structure with red cherry, dried herbs and hints of leather with a lengthy finish. Lovisolo stated, "This is not an easy wine, it is not for beginners, it is finesse in a glass."
Bersano Barolo Riserva 2011 - Intense aromas of black cherry, mint, and hints of violet with a slight savory note and a persistent finish. 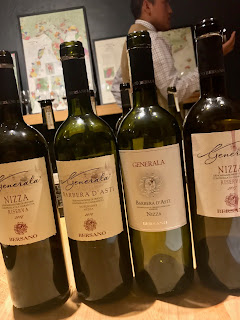 We followed this with a vertical of the company's Barbera d'Asti from the Nizza sub-region. Bersano has a 55 hectares spread through four estates. Nizza, located in Monferrato in the heart of the Barbera d'Asti district, became its own DOC in 2014 and is known for its high quality Barbera. The wines age for 18 months minimum with Riserva wines aging for 30 months.

Generala Nizza Riserva 2014 - Fresh, fruity, young and drinkable. After a wet, cool, and cloudy summer, September sun ripened the grapes fully.
Bersano Barbera d'Asti Nizza Superiore 2010 - Leathery. It was a great vintage though this bottle was a little tired. From a wetter than average year which began with a colder than average winter followed by a hotter than average summer.
Bersano Nizza Barbera d'Asti 2007 - Fresh aromas of red cherry with good acidity and a light spicy finish. From an early harvest, after a hot and dry summer.
Generala Nizza Riserva 2015 - Less acidic than the 2014 with mixed cherry/berry and a hint of chocolate. A cold winter, rainy spring, and hotter than average summer.