A Visit to Château de Pitray

Château de Pitray rests on 250 acres of land in the Côtes de Cadillac sub-region of Bordeaux. The estate is divided between meadowland, forest, and the vineyard.

Château de Pitray, which looks like a storybook castle, has a long history. It is the oldest continuously family-owned château in Bordeaux. The family has been there for six hundred years. The manor house, located about ten miles from St-Émilion, was built in the 15th century. The property is known now for its grape-growing and wine production but its record as a vineyard would not begin until the 18th century. Prior to that time, it was a more typical mixed-use farm. The family would not only survive years of war at home in France but would also continue to flourish while some members even came to fight for American independence as well. The chronicle of this family is as interesting and diverse as the land itself.

The current vision of the estate began in the 1960’s when Louis de Simard de Pitray began selling his wines in both the U.S. and Great Britain. The next generation continued to build for the future. Alix de Pitray and her husband, P.E. de Boigne, would begin to invest in new French oak barrels in the early 1990s in an effort to improve the quality of the aging they were able to do. Modernization of the cellar was completed with temperature controlled stainless steel vats for maceration and fermentation.


Jean de Boigne, who took over the management of the chateau in 2003, met our group upon our arrival. After getting us settled into our rooms, we were welcomed into the living room to have pre-dinner cocktails with the family. Happy children invited us to go swimming with them and to see more of the property. A family dinner immediately followed giving us the opportunity to taste through several wines over dinner as the family's long history was shared. 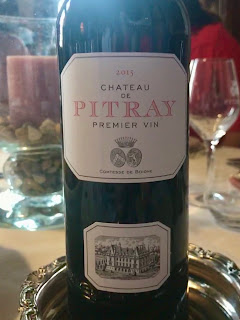 We tasted not only wines from Château de Pitray but some selections from Boigne's friends and neighbors, as well. The 2015 vintage was generous, smooth and enjoyably drinkable. We were surprised by a single varietal Cabernet Franc and we were taken back in time a bit with a bottle of the Château de Pitray Madame 2011 which was fresh, bright and elegant. I did not take tasting notes at this dinner as I wanted to hear the family's stories and enjoy the experience.

All of the vineyard care is done by hand from the pruning to sorting the grapes at harvest. Château Pitray has chosen to not use any herbicides in an effort to protect their people, the land and the environment. The vineyard of Pitray is ninety contiguous acres in size and sits on the clay-limestone plateau of Gardegan, facing south. It is planted with 73% Merlot, 23% Cabernet Franc, and 4% Malbec. On average, the vines are about thirty years old. 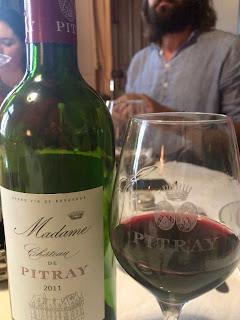 The Chateau features four guest rooms that can be rented for a stay in the Cadillac area of the Côtes de Bordeaux, you can get more information on that here. During my time on the property, I was in the Bamboo Room. Both this bedroom and the attached bathroom are spacious with views overlooking the pool. The location is ideal for a relaxing country retreat but also close enough to easily visit the historic town of St. Emilion by car.
Both wines seen here are highly recommended as is a night at the château when traveling in the area.
Check out Château de Pitray's website for a virtual tour.