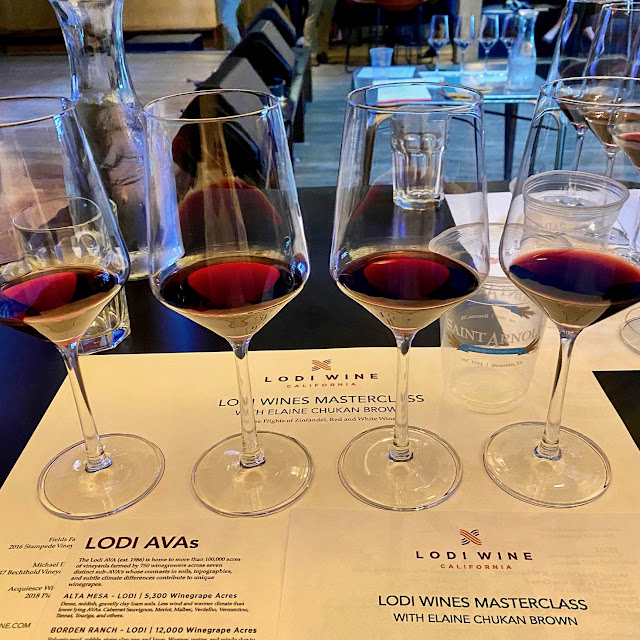 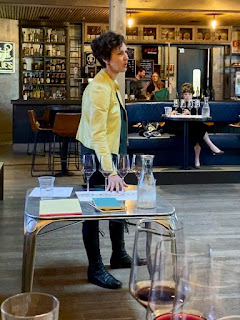 Two months ago, I attended a Lodi Wines Masterclass in Houston taught by wine educator, Elaine Chukan Brown with Executive Director of the Lodi Winegrape Commission, Stuart Spencer. I am breaking this seminar down into three posts starting with the Zinfandel wines. I have also added some additional terroir notes from my visit to Lodi last spring. 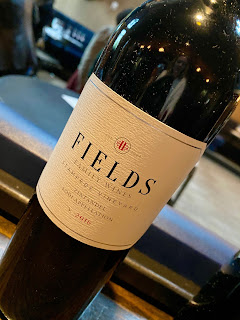 Lodi calls itself the "Zinfandel Capital of the World" because historically it has produced about 40% of California's Zinfandel grapes.  There are over 100,000 acres planted to wine grapes in Lodi with Zinfandel making up approximately 17,000 of those acres. About 2,000 acres are home to ungrafted, head-trained, old vines that date back to pre-Prohibition, most of the wines below belong to this category. The amount of Zinfandel being grown in Lodi has been on a lowering trend in the past few years due to the fact that less White Zinfandel is being produced. Yields from red Zinfandel vineyards are much lower than what is grown on a white Zinfandel field. In 2019, only 32.7% of California Zinfandel came from Lodi, Spencer notes, "We will likely see this percentage gradually decline as less white Zin is produced up here and more vineyards are removed."

No one needs to be concerned about less Zinfandel being produced, however, when these changes are leading to higher quality Zinfandel being made. Lodi also makes far more than just Zinfandel with over 125 wine grape varieties growing in the greater Lodi AVA, stay tuned for more on that in an upcoming post.
Lodi enjoys a Mediterranean climate with warm, dry summers and cool, damp winters. The overall yearly rainfall is 17 inches. There are some subtle climatic and soil differences that exist throughout the seven nested sub-AVAs. For this tasting, we are looking at just two, the Mokelumne River AVA and the Clements Hills AVA which, as Brown explains, are truly the "heart of Lodi". 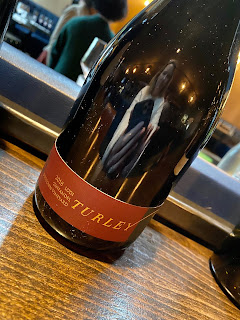 Both of these southern AVAs have historically been the main growing areas. They have the most acres of wine grapes planted of the seven. Between the two, they have over 63,000 of the total100,000 in the greater region.

The Clements Hills AVA is located on the south-east side of the Lodi region. It comprises 85,400 acres of which 21,700 acres are planted to wine grapes. It has rolling hills with elevations ranging from 100-450 feet above sea level. The Mokelumne River flows down from the Sierra Nevada through its northern part. It is somewhat warmer and wetter than the Mokelumne River AVA on its western border but it still experiences wide diurnal swings like the west side due to the cooling influence of the Delta Breeze. Soils vary through the subregion and include old volcanic sediment, clay, and sandy loam. 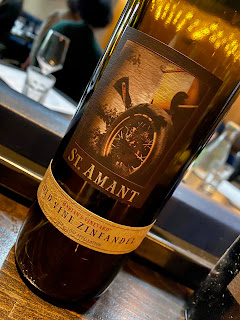 Clements Hills - Lodi wines:
Fields Family Wines 2016 Stampede Vineyard Old Vine Zinfandel - Sourced from a 1920s vineyard with a small portion planted in 1940. The berry size tends to be smaller in the Stampede Vineyard due to its more depleted sandy loam soils. The more elevated juice to skin ratio creates a firmer acid/tannin structure than average. The wine was fermented with ambient yeast and underwent malolactic fermentation. It was aged in old French oak for 18 months. ABV: 14.6% I found this wine to be the most elegant and it was my favorite in this line up.
Fruity aromas of fresh plums and berries with dusty tannins (Brown referred to them as powdery), full-bodied with crunchy raspberry seed spice, a slight savory note, and a lingering, fresh finish. SRP $28

Turley Wine Cellars 2018 Dogtown Vineyard Zinfandel - Sourced from a vineyard planted in 1944, the vines grow in granitic-based sandy soils with some volcanic influence. This wine was aged in old French oak for 14 months. ABV: 15.4%
Full-bodied and rounded, a bit riper than the previous wine with more intense blackberry aromas and flavors, velvety tannins and a long, spicy fruit-filled finish. $38

The Mokelumne River AVA is located on the south-west side of the greater Lodi AVA and surrounds the City of Lodi, it is comprised of 85,700 acres of which 42,000 acres are planted to wine grapes. The elevations are some of the lowest in Lodi ranging from 10-85 feet and it is named after the river that flows through it. This sub-AVA has the most old vine vineyards in the region, not only of Zinfandel but also Carignan, Cinsaut, and Alicante Bouschet. It has a cooler climate due to the Delta Breeze which flows directly from the Bay area through an opening in the mountain range. The cold, deep soils are made up of sandy loam with a high organic content which hold more water due to the more absorbent clay. These conditions make dry farming easier. Vineyards in this AVA tend to produce larger grape clusters than the vineyards in the east, creating more flavor and softer tannins. 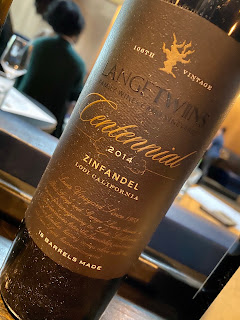 Mokelumne River AVA - Lodi wines:
St. Amant Winery 2018 Marian’s Vineyard Old Vine Zinfandel - This vineyard was planted in 1901. The vineyard appears to have a different clone of Zinfandel which produces more elongated clusters with larger than average berries.The winery is also historically important as they were the first to start buying grapes from single vineyard sites to make wine which allowed growers to taste their grapes in finished form for the first time. Prior to this, most growers sold their wine to bulk producers and never knew exactly what was the quality from their own vineyards. This wine was aged in French oak for 11 months. Brown referred to this wine as an example of “classic Lodi Zin”. ABV: 15.7%
Complex aromas of brambleberry and root beer with a savory, earthy note, a full body, soft tannins, and a slight raisiny nuance in the persistent spicy finish. $24

Lange Twins Family Winery & Vineyards 2014 Centennial Zinfandel - Sourced from the Lewis Vineyard which was planted in 1904 and sits on fine, sandy loam. This wine has a legacy component and, unlike the other wines in this tasting, is aged in American oak for 24 months.
Full-bodied, soft, and more rustic with aromas of cooked fruit and a short, earthy finish. I found it lacking in acid and freshness. ABV: 16% 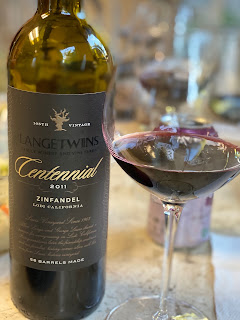 I happened to have another vintage of this bottle at home which had been gifted to me. I decided to open my 2011 to serve with a dinner of barbecue ribs and sausage. It was a very different wine than the 2014.
LangeTwins Family Winery & Vineyards 2011 Centennial Zinfandel - Red fruit aromas and flavors with licorice and a smoky, nutmeg note from the American oak barrels, with a full body, smooth tannins, good acidity and a lingering finish. ABV: 15.6%
All but one wine had over 15% alcohol, Brown stated that in her opinion, “14.5-16% alcohol is the natural alcohol level for a ripe Zinfandel grape.” She also warned against assuming that the higher alcohol levels automatically meant that the wine would taste too big, too jammy, or too hot. Lodi is making Zinfandel in more than one style and these producers in these southern AVAs are doing a good job with balancing Zinfandel’s higher alcohol potential with lifted aromas and flavors.